How To Wear: The Peplum

Ok, so Peplums were everywhere last year.  They were on dresses.  They made them as tops you could pair with jeans, mini skirts, maxi skirts.  Designers all over were including them in their designs.  BUT Because I’m your friend, and because this site is to help you keep up on everything current, I’m going to tell you something you need to know.

Peplums are going OUT.

So PLEASE don’t buy this one or ones like it, because they are just not in anymore.  I do want to show you the type of peplum that IS in, though.  There are a few that I still love.  Most of them are asymmetrical and are very designer based…but let me show you a few.

THE RIGHT WAY TO WEAR A PEPLUM TOP: 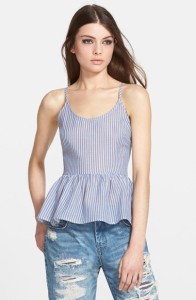 The reason I like this peplum top is because it’s updated with the spaghetti strap and looks light and summery.  It looks effortless, easy, breezy, and not heavy like the one above.
(Glamorous Spaghetti Strap Peplum Top

This is an example of the designer peplums.  These are perfectly placed for the sake of the design of the dress.  They make a statement, it’s not just a ruffle around your belly button.
(Herve Leger ‘Hindi’ Peplum Waist Bandage Dress 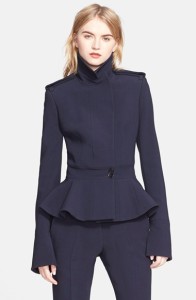 Another designer piece.  The peplum in a jacket is still a do. 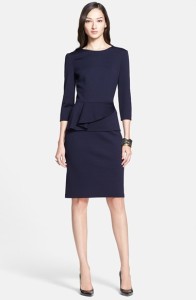 This is an example of an asymmetrical peplum.  This one works because it’s chic and understated.  Lines are sleek and slim.  It’s also classy and sophisticated because of the minimalism.

I hope with these examples you’ll see the distinction between the ones that are in style and the ones are not so cute anymore.  Don’t hesitate to ask me questions about the peplum.  I’d love to answer any questions about which ones are wearable/questionable.  I know you’ll be fabulously fashionable.